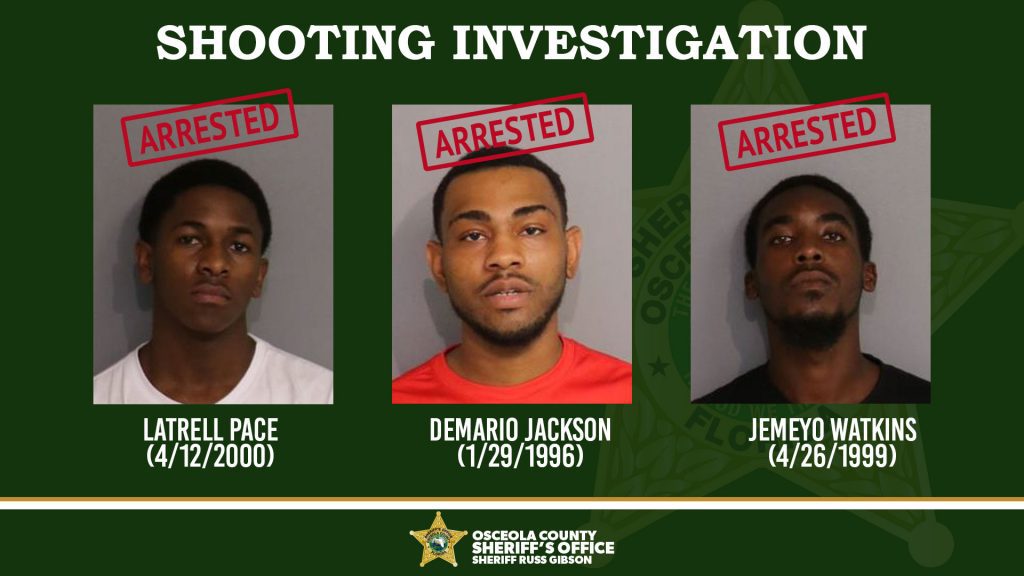 Osceola County (October 13, 2020) On October 11, 2020, at approximately 1:23 AM, deputies responded to the area of Gobi Dr. in Kissimmee (Windsor at Westside Subdivision) in reference to receiving noise complaints and reports of a large party in the neighborhood. It was later reported there were hundreds of people at the party. As deputies arrived on the scene they heard gunfire erupt in the area. Due to the heavy traffic and the large crowd in the area, deputies had to park their vehicles and make their way towards the residence on foot. As they approached they continued to hear gunfire and observed a male carrying an AR15 Rifle. The male was given commands to stop but he fled on foot. A black AR15 Rifle was later found between two houses along with a loaded magazine. Deputies later located a vehicle occupied by three males. The males were sweating and breathing heavily and were discovered to be armed with an AR15 Rifle and 4 handguns. One of the handguns had the serial number scratched off. The males were subsequently charged with weapons charges unrelated to the shooting. The shooting investigation revealed 7 occupied residences and 10 vehicles had been shot. Approximately 60 casings from several caliber weapons were located and recovered. It was also determined that the incident location was 8848 Corcovado Dr. Kissimmee, FL, and a flyer was found advertising a party at that location. At this time, evidence continues to be recovered as the investigation continues.

The Osceola County Sheriff’s Office is dedicated to serving our community and increasing public safety. Anyone with information related to this case or any other similar incidents, please contact the Osceola County Sheriff’s Office at (407) 348-2222 or Crimeline at 1-800-423-8477, where information leading to a felony arrest may be eligible for a reward of up to $1,000 dollars. https://crimeline.org/