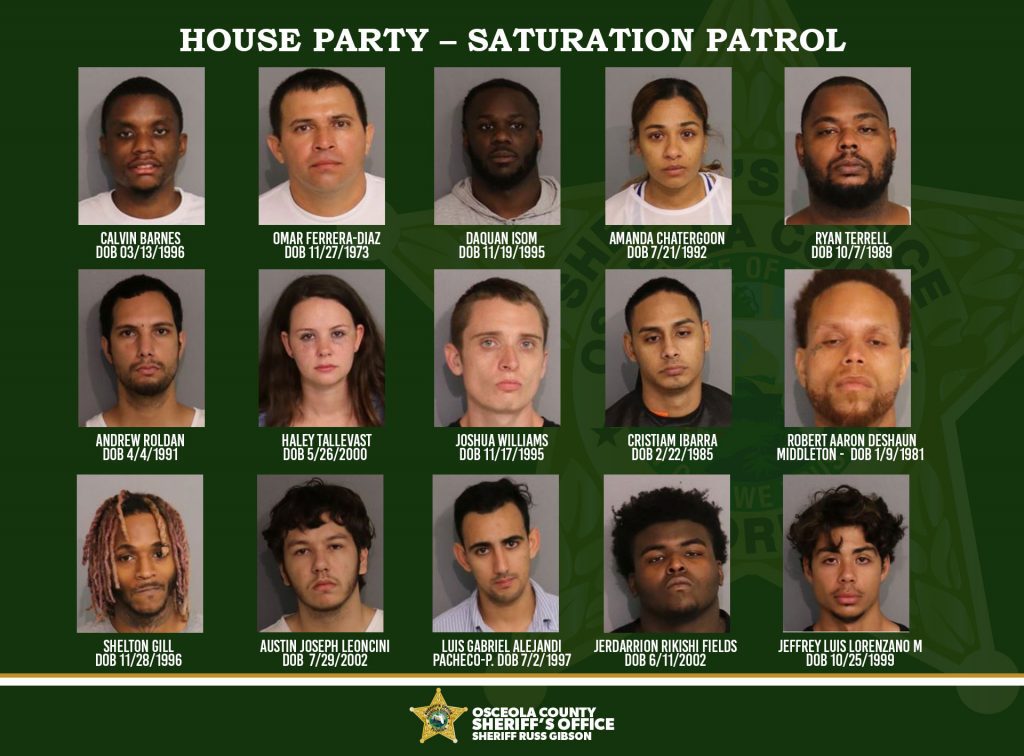 Osceola County (October 20, 2020,) the Osceola County Sheriff’s Office conducted a saturation patrol over the weekend of October 16 and 17, in the west corridor of the county. The overall goal of this saturation patrol was to address the house parties, which have sprouted out in this region and have presented a significant public safety issue. These parties have resulted in multiple violent incidents including shootings over the last several weeks and one homicide. The focus of the operation was determined by information gathered by this agency’s Intelligence and Tourist Policing units.

The two-day saturation patrol was conducted on Friday (10/16) and Saturday (10/17). Through the utilization of our Intelligence Unit, we identified and stopped two large parties and several smaller parties before they got out of hand. The operation resulted in multiple felony arrests and two firearms were confiscated. The sheriff’s office units who assisted in this operation were the Tourist Policing Unit, Patrol, Criminal Investigations, K9, DUI, Motors, Aggressive Driving Units, and Communications. The operation resulted in over 180 traffic stops, 105 citations, 15 arrests, and 2 firearms confiscated. Charges from the arrests included Possession of Marijuana with Intent to Sell, Possession of a Concealed Firearm, Street Racing, DUI, Driving While License Suspended, and an out of county warrant.

The Osceola County Sheriff’s Office is dedicated to serving our community and increasing public safety. Anyone with information related to these cases or any other similar incidents, please contact the Osceola County Sheriff’s Office at (407) 348-2222 or Crimeline at 1-800-423-8477, where information leading to a felony arrest may be eligible for a reward of up to $1,000. https://crimeline.org/

Previous Post
Lewd Conduct/Use of Computer to Solicit Minor
Next Post
Bullying 101: What it is and what you can do to help