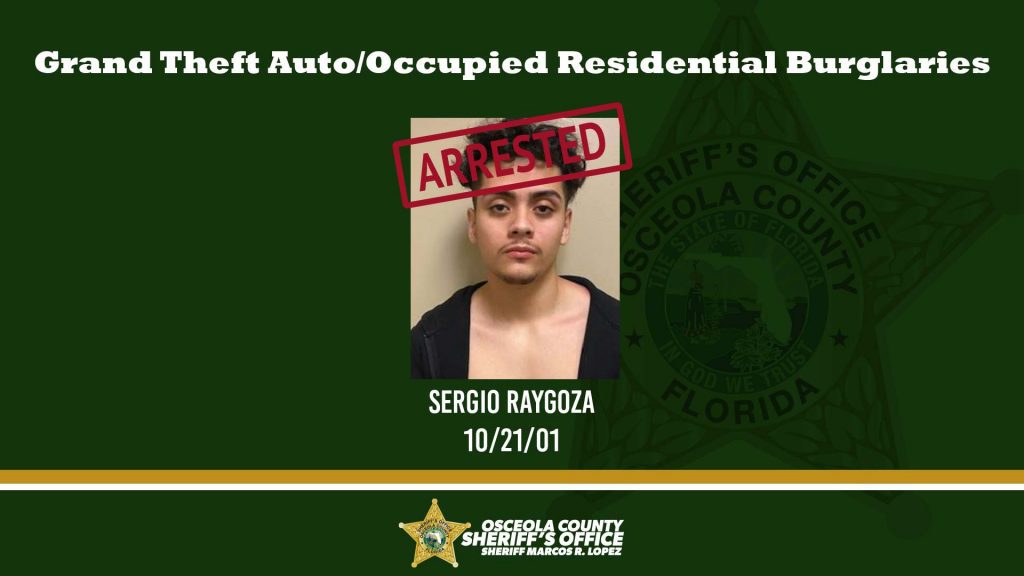 On February 6, 2021, this agency investigated two occupied residential burglaries that occurred in the Bellalago subdivision. During one of the incidents, a victim’s vehicle was also stolen. Throughout the investigation, probable cause was established for the arrest of Sergio Raygoza.
On February 25, 2021, detectives with the Osceola County Sheriff’s Office West Criminal Investigations Division were able to locate Sergio Raygoza who had active felony warrants for the stolen vehicle, burglaries to occupied residences, and dealing in stolen property.
Mr. Raygoza advised detectives he was hanging out with several friends and decided to break into the victim’s homes. Mr. Raygoza admitted to going inside the residences, knowing the victims were inside sleeping. After searching the residence, he came across a set of keys, which matched the victim’s Dodge Durango sitting in the driveway. Mr. Raygoza then stole the vehicle, along with several electronics and credit cards.
Contact was made with Mr. Raygoza in Orlando as he was entering the stolen vehicle and he was placed under arrest for his active warrants. Mr. Raygoza was booked into the Osceola County Jail on the following charges: