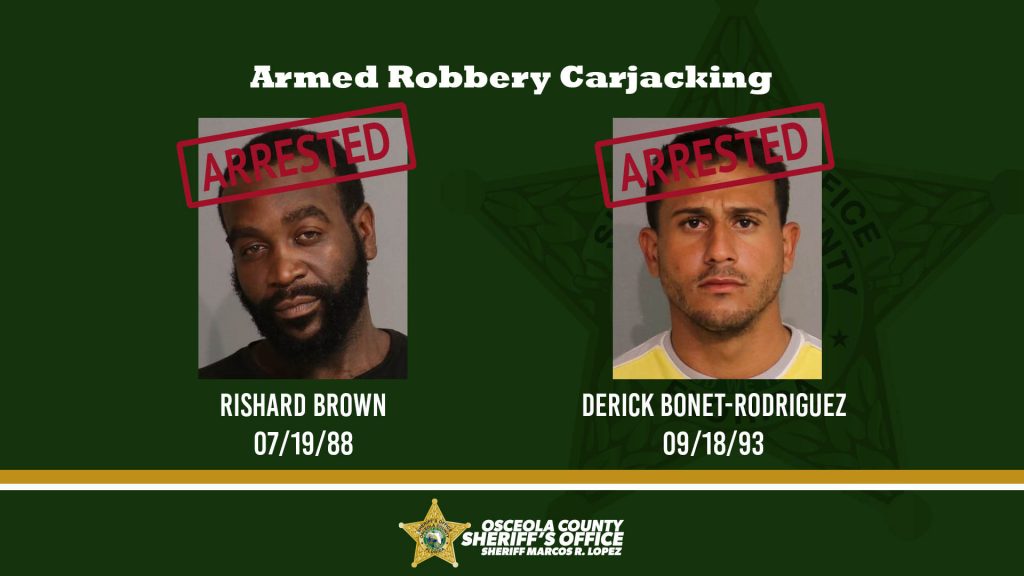 On February 9, 2021, at approximately 2318 hours, Osceola County deputies responded to the Applebee’s located at 2060 E. Osceola Parkway Kissimmee, Florida to a report of an Armed Carjacking. The victim told deputies she was leaving the restaurant when an unknown black, male approached her in the parking lot armed with a knife, demanded her car keys, cellular phone, and cash. The suspect drove off in the victim’s vehicle and fled the area.

On February 10, 2021, Osceola County Sheriff’s Office Robbery and Tourism Policing Unit detectives were able to identify the suspect as Rishard Brown. Upon searching known areas that Rishard Brown may have frequented, detectives were able to locate the stolen vehicle being driven by the suspect, Rishard Brown, which ultimately fled the area to Saint Cloud. As the vehicle was fleeing from deputies, the passenger (Derik Bonet-Rodriguez) jumped out of the vehicle, fled on foot, and was apprehended. The vehicle continued eluding deputies where it eventually drove into the backyard of a house on Augusta Circle and crashed. The suspect, Rishard Brown, was arrested out of the stolen vehicle moments after the crash.
Both Rishard Brown and Derik Bonet-Rodriguez were later transported to the Osceola County Department of Corrections for the following charges:
Rishard Brown- Armed Carjacking, Armed Robbery with a Weapon, Grand Theft, Aggravated Assault, Fleeing to Elude, Reckless Driving, Driving While License Suspended, Burglary to a Structure, and Resisting without Violence Zero Bond Derik Bonet-Rodriguez- Resisting without Violence $500 bond.