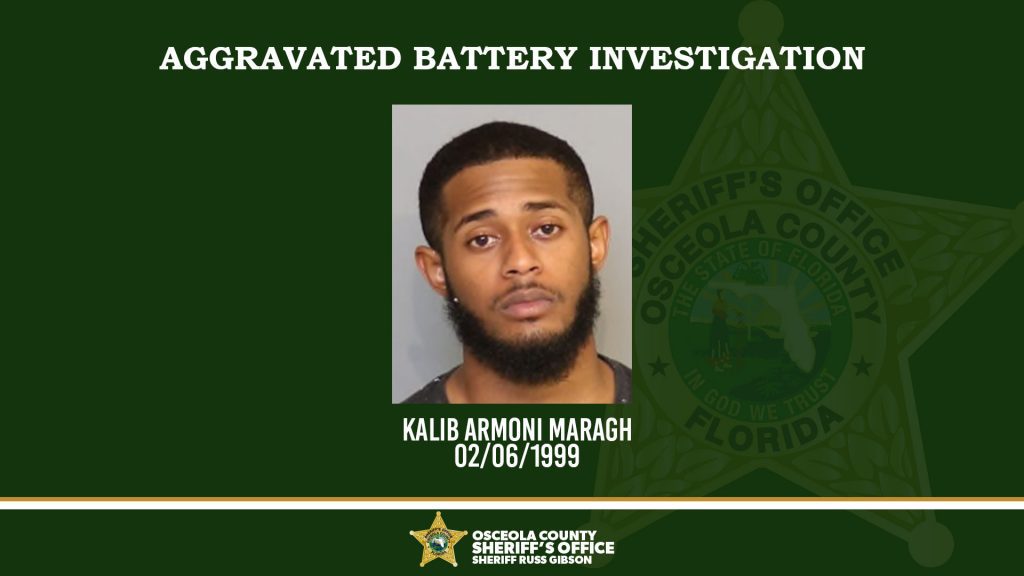 Osceola County (November 4, 2020) On November 2, 2020 at approximately 4:55 PM, deputies responded to Orlando Health in St. Cloud in reference to an incident that occurred on Naples Way, Kissimmee, Florida. The victim advised during an agreement with Kalib Maragh, he became extremely upset and began hitting them all over their body with the barrel of a firearm he was holding. He also struck them in the face and fired a round from the firearm at the victim. Continued abuse occurred over the next of couple days while Kalib kept the victim inside their room, not allowing them to leave.
On November 2, 2020, the victim was able to escape the residence and flag down a passer-by in the area. After getting picked up and leaving the area they were subsequently transported to the hospital. A search warrant was obtained and served at 904 Naples Way, Kissimmee, Florida. Kalib was not located at the residence and is still believed to be in possession of the firearm.
At this time, The Osceola County Sheriff’s Office is attempting to locate Kalib Maragh due to a felony warrant for his arrest for the charges of Aggravated Battery with a Deadly Weapon (Domestic), Aggravated Assault with a Deadly Weapon (Domestic), Shooting into an Occupied Dwelling, Possession of a Firearm by a Convicted Felon, and Battery (Domestic).
The Osceola County Sheriff’s Office is dedicated to serving our community and increasing public safety. Anyone with information related to this case or any other similar incidents, please contact the Osceola County Sheriff’s Office at (407) 348-2222 or Crimeline at 1-800-423-8477, where information leading to a felony arrest may be eligible for a reward up to $1,000 dollars. https://crimeline.org/