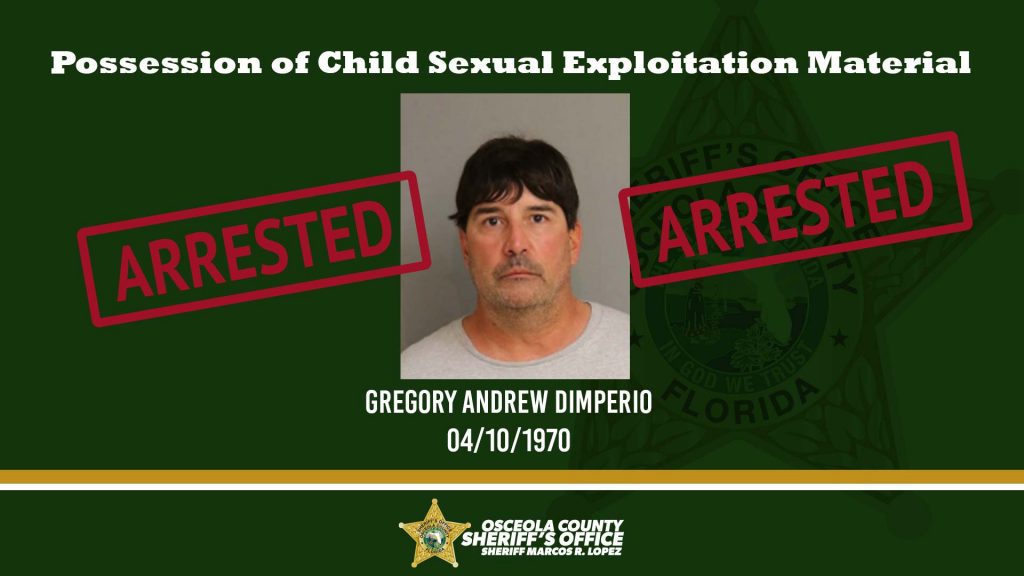 Osceola County (August 20, 2021) On August 19, 2021, the Osceola County Sheriff’s Office responded to Waterside Vista Lane, St. Cloud, Florida in reference to a tip received about a suspect possessing child exploitation material. Deputies obtained an IPad belonging to the suspect, Gregory Andrew Dimperio. The IPad contained numerous images of child exploitation material. Detectives with the Internet Crimes Against Children (ICAC) unit responded to the scene and began an investigation into the incident.
Detectives with the ICAC unit conducted an interview with Gregory Andrew Dimperio. During an interview, Dimperio admitted to owning the IPad and possessing child exploitation material. Dimperio admitted to viewing child pornography for the last (5) five years. A search warrant for the IPad and residence was obtained by Detectives with the Internet Crimes Against Children Unit (ICAC). A forensic examination of the IPad and revealed over 41,000 images of child exploitation material. Based on evidence obtained during this investigation, Mr. Dimperio was charged with numerous counts of Possession of Photo/Video of Sexual Performance by a Child. Mr. Dimperio was arrested and booked into the Osceola County Jail with a $25,000.00 bond.
The Osceola County Sheriff’s Office is dedicated to serving our community and increasing public safety. Anyone with information related to this case or any other similar incidents, please contact the Osceola County Sheriff’s Office at (407) 348-2222.