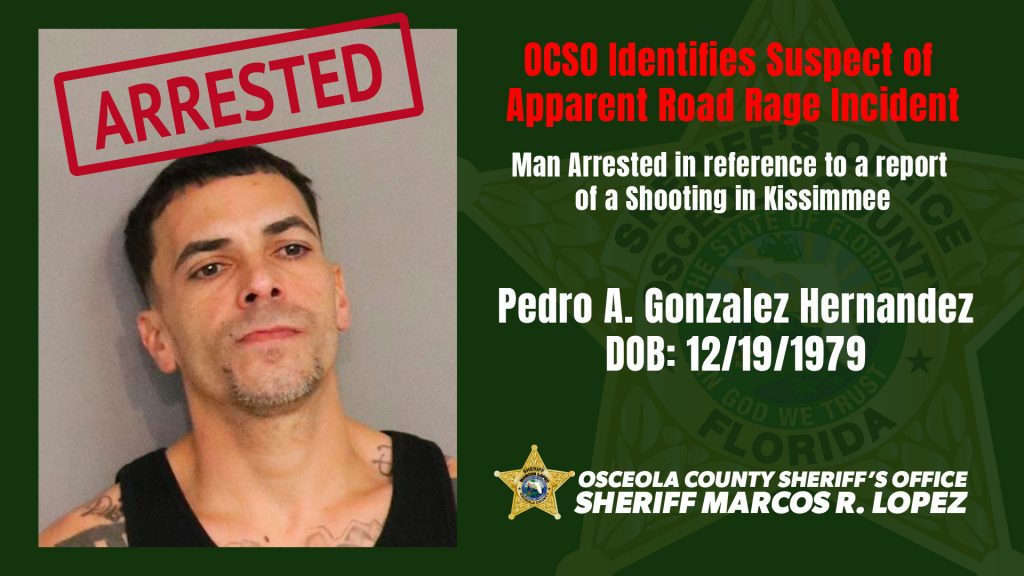 Osceola County, FL: On January 11, 2023, at 1024 hours, the Osceola County Sheriff’s Office responded to Boggy Creek Road and Boggy Terrace area about a report of a shooting. Upon their arrival, the victim stated he was driving in the area of Villa Sol when a vehicle pulled up beside him, and the driver, and sole occupant of the vehicle, fired a handgun at him. The bullet from the handgun went through the victim’s vehicle’s door and into his leg, causing a non-life-threatening injury. The victim was able to provide a detailed description of the suspect and his vehicle. He also advised the shooting was possibly related to a road rage incident involving the other vehicle that had occurred minutes prior to the shooting.

Multiple patrol and investigative units saturated the area. They were able to locate the suspect vehicle parked at an address on Great Oaks Boulevard. The area around the address was surrounded, and the suspect eventually surrendered and was taken into custody. The suspect was identified as Pedro A. Gonzalez Hernandez, DOB: 12/19/1979. Pedro admitted to getting into an altercation with another driver in the area but denied shooting him. Pedro was arrested and transported to the Osceola County Jail and charged with Attempted Felony Murder, Discharging a Firearm from a Vehicle, Possession of a Firearm by a Convicted Felon, and Tampering with Evidence.

This continues to be an ongoing investigation, and if anyone has information related to this incident, please contact the Osceola County Sheriff’s Office