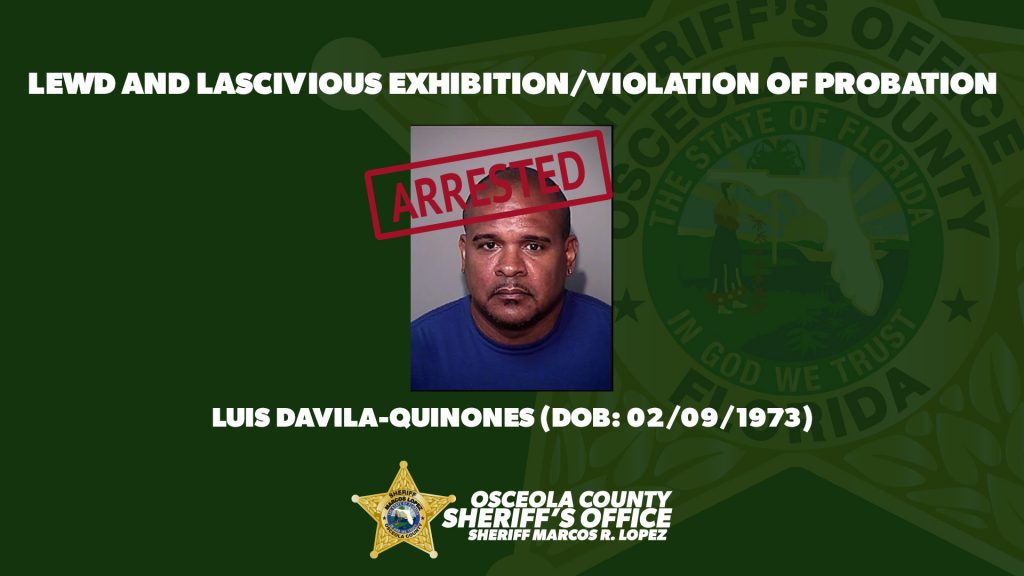 On May 12, 2022, an Osceola County Sheriff’s Office School Resource Officer working at Bellalago Academy(Poinciana, FL) was notified that several children at recess observed an unknown subject exposing his genitals to them.
Detectives with the Special Victims Unit responded to the scene and began an investigation. Through investigative measures, detectives were able to identify the suspect as a registered Sex Offender, Luis Davila-Quinones (DOB 2/9/73). Detectives interviewed Luis who was cooperative with the investigation and admitted to masturbating in view of the children. Luis was arrested for Lewd and Lascivious Exhibition and Violation of Probation. Luis was transported to the Osceola County Jail with NO BOND. It should be noted Luis was on probation for a previous 2017 case in which he attempted to kidnap a ten-year-old female outside of the Walmart Store located at 904 Cypress Parkway in Poinciana. In that case, Luis was adjudicated guilty of Attempted Kidnapping to Commit a Felony and sentenced to 16 months in the Department of Corrections, followed by 10 years of community control.
The Osceola County Sheriff’s Office is dedicated to serving our community and increasing public safety. Anyone with information related to this case or any other similar incidents, please contact the Osceola County Sheriff’s Office at (407) 348-2222.