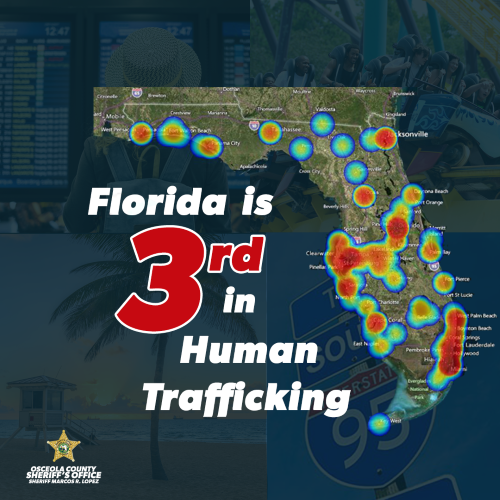 Human trafficking is the 3rd largest crime industry in the world. Out of the 50 states, Florida ranks 3rd in rate of human trafficking. Within the state, the Central Florida area ranks 3rd behind Miami and Tampa.

What is Human Trafficking?

Sex trafficking is the most recognized form of human trafficking. It’s when victims are manipulated or forced against their will to engage in sex acts for money. Sex traffickers may use violence, threats, and manipulation to lure victims. However, keep in mind that prostitution is not sex trafficking. Prostitution is the process of performing sexual acts in exchange for money without the use of force, fraud, or coercion. The use of force is a key indicator in trafficking. Truck stops, hotel rooms, rest areas, street corners, clubs, and private residences are just some of the places where victims are forced to sell sex. Central Florida is well known for travel and tourism as well as transients. Tourists and transients are often pursued by traffickers. We have a lot of hotels, truck stops, rest areas, and other types of locations where sex trafficking is prominent.  Deputies are constantly patrolling our tourist areas for this type of illegal activity.

Forced labor is where victims are made to work for little or no pay. It is very real and happens everywhere including the United States. It can happen to both adults and children. Force, fraud, and coercion are often used to trap forced labor victims. They are often forced to live in inhumane conditions and work in dangerous environments without proper safety gear or training. You can often find them at factories, farms, and construction sites. Many are forced to manufacture or grow products that we use and consume every day. To help prevent forced labor, be sure to research how your products are made and where they come from.

Victims of domestic servitude are probably the most difficult to spot. They are hidden in plain sight as they are forced to work in homes across the United States. They are prisoners working as nannies, maids, or domestic help. Traffickers sometimes take victims’ identification papers and travel documents to limit their freedom. This doesn’t mean every nanny or maid you meet is a victim, but it does mean that you should be more observant and vigilant toward domestic workers.

In 2019, Florida had 896 human trafficking cases reported. The number of reports have grown significantly each year. Though it is a seemingly bad thing to have increased reports, it also means that more cases are being reported. Human trafficking crimes often go unreported. With an increase in education and awareness of resources, we are able to help victims come forward and find the support they need. The Trafficking Hotline has made new methods of reaching out available including text. In 2019, the number of identified trafficking situations that came from a text increased 33% compared to the 7% growth the previous year. Minors are a large reason for this increase. In 2019, 42% of minor victims and survivors used texting to contact the hotline.

Though a high number of cases isn’t always a good thing, it is apparent that the hotline and online reporting tools are having a positive impact on victims and survivors as far as coming forward with their stories. Please use the resources below if you or someone you know is a victim or survivor of human trafficking.

If you suspect human trafficking of any kind, please contact federal law enforcement at 1-866-DHS-2-ICE or submit a report online at www.ice.gov/tips.

To learn more about human trafficking statistics and how you can help spot a victim, visit www.polarisproject.org.

For a more in depth explanation of Human Trafficking, please watch the video below provided by The U.S. Department of Homeland Security.