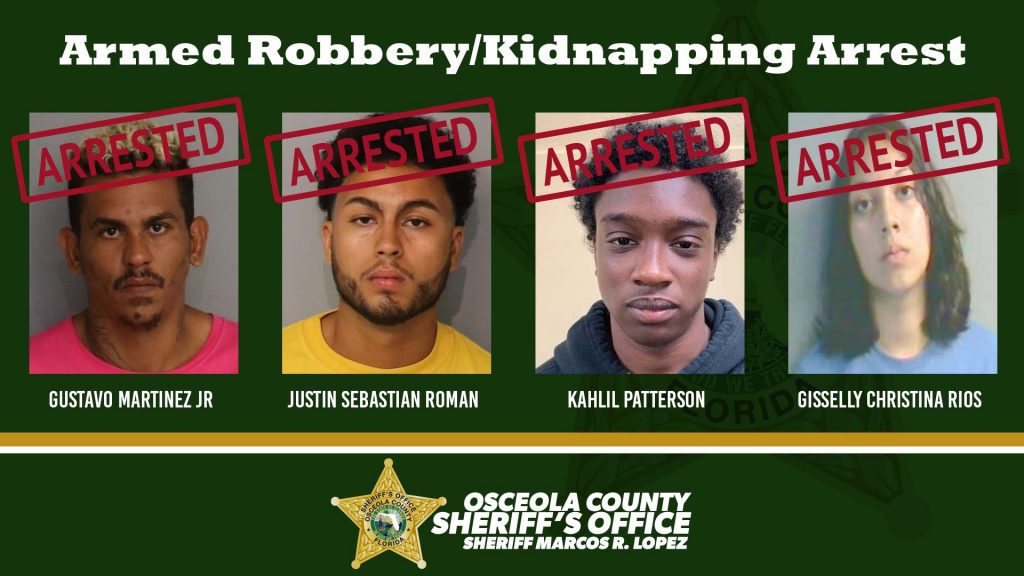 On May 31, 2021, Robbery detectives responded to Buenaventura Lakes to a report of an Armed Robbery and Kidnapping call. The victim told detectives several individuals he has known from the neighborhood kidnapped him at gunpoint. The suspects took the victim to the park where he was robbed at gunpoint and beat up by the suspects. The victim was able to tell the detectives who all of the suspects were involved in the incident. Robbery detectives were able to identify all the suspects involved, Gisselly Rios (juvenile), Kahlil Patterson (Juvenile), Justin Roman, and Gustavo Martinez. Detectives also learned the suspects involved recorded the robbery/beating and post it on social media. All the suspects involved were located, arrested for their involvement in the incident, and were either booked into the Osceola County
Jail, or The Juvenile Department of Corrections on the following charges: Armed Robbery with a Firearm, Kidnapping, Grand Theft, and Aggravated Battery with a Deadly
Weapon.
The Osceola County Sheriff’s Office is dedicated to serving our community and increasing public safety.
Anyone with information related to this case or any other similar incidents, please contact the Osceola
County Sheriff’s Office at (407) 348-2222 or Crimeline at 1-800-423-TIPS (8477)