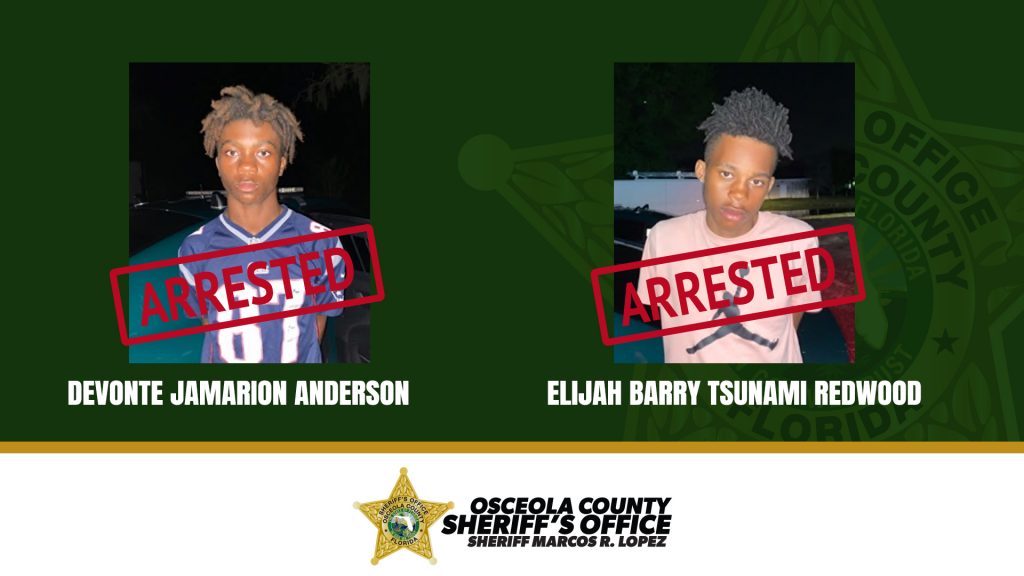 On April 04, 2022, at approximately 1550 hours, the Osceola County Sheriff’s Office investigated an armed robbery, which occurred in the area of the Walmart located at 904 Cypress Parkway, Kissimmee, Florida. Contact was made with both elderly victims who advised they were sitting inside of their vehicle, after shopping, when they were approached by two black males. The male victim advised one suspect approached his driver’s door and pointed a large knife at his chest and pulled him out of his vehicle. He then pepper-sprayed the victim and took cash from his pocket. The second suspect approached the female victim at the passenger door and also pointed a knife at her. The suspect then grabbed the victim and forced her out of the vehicle. Both suspects then entered the victim’s vehicle and began rummaging through it. Due to the victim’s yelling for help, multiple witnesses ran to the area and assisted.
The suspects fled on foot in different directions. One suspect entered the Dollar Tree, where he was approached by a witness. The witness removed the suspect’s ski mask, knife, and shoes from him. The suspect then began running again towards the wooded area just east of Walmart. Patrol units established a perimeter and ultimately located the suspects walking near the wood line. Both suspects were positively identified by the victim and witness.
The suspects were identified as Devonte Jamarion Anderson (18 yoa) and Elijah Barry Tsunami Redwood (17 yoa). Both suspects were placed under arrest for the following charges: Armed Robbery with a weapon, battery on a person 65 years or older, aggravated assault, armed burglary conveyance, and petit theft.
The Osceola County Sheriff’s Office is dedicated to serving our community and increasing public safety. Anyone with information related to this case or any other similar incidents, please contact the Osceola County Sheriff’s Office at (407) 348-2222.